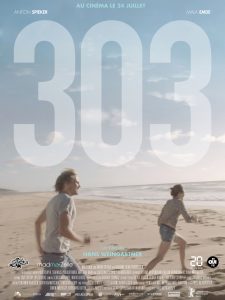 The movie “303” is a film that invites reflection. It is interesting and pleasant to watch, because the relationship between the two main characters develops as the films goes along: Jule and Jan are complementary, despite their big differences. They evolve as individuals as time goes by and as they live through new experiences. The acting as whole was really good, especially in personal and intimate scenes.

Despite the scenario being very realistic, we lack some information and details that are left aside through ellipsis. The first discussion between the two characters seems a bit unrealistic, since they broach very serious subjects very quickly. However, their reflections during the whole journey are invested and passionate. We almost forget that June and Jan are alone and that they don’t interact with anybody else.

From a technical standpoint, there are numerous close-up shots on the characters’ faces during the emotional moments. The camera also films many natural landscapes, giving us the impression to be part of the journey. The outside environment is actually the central focus  of “303”: nature is ever-present and breathtaking. The viewer is all but immersed in the film, as if part of a “mise en abyme” in this road trip through Europe.

There are many silent moments: the only things you can hear are background noises of the camper van, of the road, of their environment and it is enough, because it is precisely this minimalist and authentic aspect which allows the viewer to focus on the characters’ story. Some scenes sometimes seemed a tad long to us, sometimes predictable, while other were too short. Overall, “303” is a calm but fascinating movie.