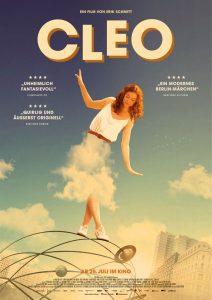 The movie “Cleo” is an utterly fantastic dramatic comedy, with the German actress Marleen Lohse in the main role (Cleo), a little orphan girl turned woman. She meets a young man with a map leading the the Sass Brothers’s treasure, buried in historic Berlin since the end of the 1920’s.

They then roam through the city to find the treasure containing a symbolic object for Cleo: a clock that can turn back time, that she hopes to find since she’s been a child, to make sure that her mother never died.

Between her regrets and her fear of going forward, Cleo brings us along on her adventure through a magical world. A movie that is both calming and childish by its colors and editing, and tragic by its story that cautiously remind us that mistakes happen but that you cannot look back, you have to go forward.