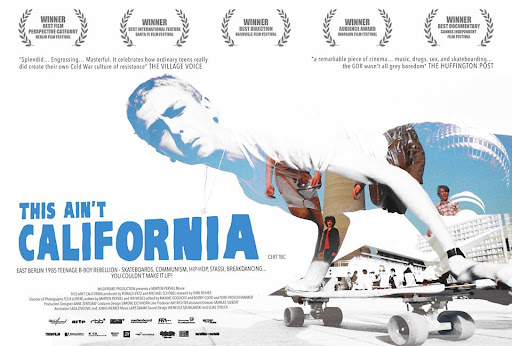 The Ciné-Mobiles jury really liked “This Ain’t California”, screened during the retrospective of the Univerciné Allemand festival. It’s the artistic diversity and the uniqueness of the scenario that made this pseudo-documentary the favorite of the jury for this 2021 edition. The sincerity of the characters while testifying during their reunion and during their years spent behind the wall makes the whole thing endearing.

The acting and the authenticity of the characters were absolutely remarkable. The casting was made even more credible thanks to the coherence between the selection of actors to show the age difference and the authentic representation of the population living on the East side of the Wall. The accessories were also really well selected and nicely reflect the reality of the historical and geographical context.

Numerous techniques are used to give the spectator an original experience. The first-person and low-angle shots allow for a “mise en abyme” in the movie, while larger shots help to (re)discover Berlin in a new angle, and animated sections convey the artistic effervescence of the director. The music also plays non-negligeable role, sometimes helping to give meaning to sections deprived of dialog. The voice-over that gives context helps reinforce the immersion in the story.

The movie’s message is well conveyed: the Cold War ear isn’t too politicized and rather brings in a feeling of nostalgia and freedom to the characters, who recount their connection to skateboarding.

The scenario is very uncommon, since it is depicted as documentary, when in reality it is fiction. The coherence and the authenticity of the movie cast doubt on in the spectator’s mind, who is almost disappointed when they learn the story isn’t real.