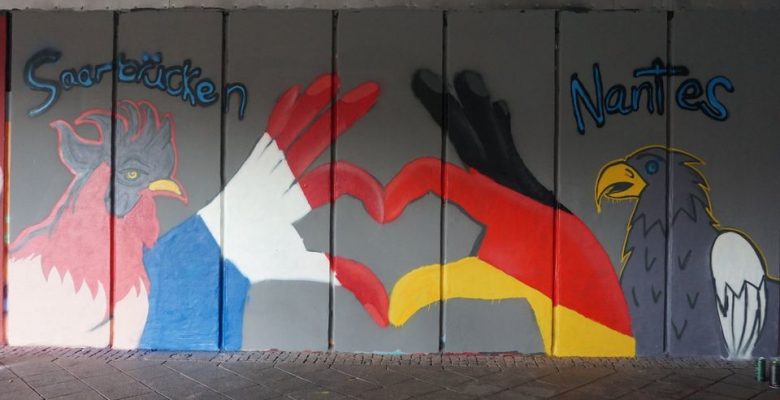 Every year since 2008, a German youth helps you discover the city of Saarbrücken, Nantes’ twin city since 1965. Simultaneously, a French youth goes to Germany on behalf of Nantes, as a « Youth Ambassador » of Nantes in Saarbrücken.

The goal is to give a younger image to the town-twinning programme, to improve and reinvigorate the cultural, professional, linguistic and athletic interactions between the twin cities, by helping them organize and set up these exchanges, but also by sensitizing young people to the importance of traveling and having an experience abroad.

Starting October of 2020, Alexia Theissen-Achille will be Sa a rbrücken’ s Yout hAmbassador in Nantes. She will be replacing Eamon Schneider, and will be able to rely on the support of Esther Amilien, Nantes’ Youth Ambassador in Saarbrücken, who is herself replacing Charlotte Chicoine. The Saarbrücker Zeitung wrote an article about Charlotte Chicoine in their September 21st 2019 issue. Read more here.

The Youth Ambassador programme between Nantes and Saarbrücken was implemented in 2008 by the CCFA and the City of Nantes (Direction de la Vie Associative et Jeunesse et Direction de l’Attractivité Internationale) as part of the programme « Travail chez le partenaire » (« work at our partner’s »), which is co-financed by the Franco-German Youth Office (FGYO). Since 2016, this mission is part of the voluntary Franco-german civic service between the City of Nantes, the City of Saarbrücken and the AFCCRE (the French Association for the Council of European Municipalities and Regions).

The programme can be downloaded here.

You can follow the Saarbrücken Youth Ambassador’s reports in the press review!

For more news, you can find the Youth Ambassador on Facebook !